Multiple layers of stretch film are applied to reinforce specific areas of the pallet or to bundle multiple units together. 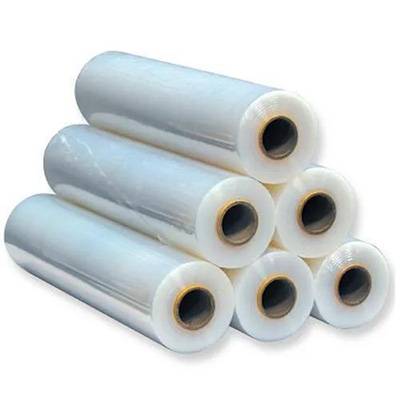 The rotation of the stretch wrapper allows the stretch film to be applied to the lower part of the combined load. More than one turn of the bottom wrap contributes to pallet stability.

Stretch films manufactured by the cast film extrusion process are called cast films. Stretch films extruded by the cast method usually have higher tear resistance, higher aesthetic value and can be quietly unfolded, which is not usually the case with films made by the blow moulding method.

Co-extrusion is the process of using the following materials; fed, melted and/or pumped through other extruders and then combined to form a multi-layer film.

A technique used to measure the impact strength or robustness of a film; this is tested by placing a crescent-shaped weight (aka dart) onto the film.

When a stretch film is stretched, strained and/or deformed; its ability to recover and return to its original state is an indication of its elastic recovery.

A test method used to measure the ability of a material to resist tearing forces. The method produces a tear in the sample material and then measures the force required to tear the sample. The resultant value of the test is called the tear value.

A device that uses mechanical and thermal action to convert a solid polymer into a molten polymer.

A manufacturing process in which material is obtained from one or more extruders and the resulting extrudate is then configured to manufacture the final product.

The rate at which film is supplied to a load is the film feed rate. The film feed rate can be adjusted as required by the load angle to maintain a consistent film tension.

The rate of tension in a film as it is applied is called film force or film tension. The rate is usually measured in pounds.

Whether the memory of a stretched film attempts to return to its original unstretched form and in the process makes the load tighter and more stable. This prevents loosening of the load that may occur after the load has stabilized. For optimum film memory and film efficiency, correct film and application settings are essential.

Film tails are the start and end sections of stretch film that are initially applied and then cut from the pallet during the stretch wrapping process.

The imperial unit of measurement used to measure the thickness or thickness of a stretch film. Example values will be read as: 70 gauge, 80 gauge or 100 gauge. Please also note: often used as a synonym for film thickness.

Refers to the gloss or shine of a surface. In the case of LDPE stretch films, it is the amount of light reflected from the surface of the stretch film. High gloss properties are usually found in cast stretch films.

Refers to the lack of clarity or inability to see through the film. It is measured by the percentage of light that does not pass through the film sample. This is a typical characteristic of blown stretch films.

The ability of a stretch film or other material to resist a rapidly applied destructive force.

Refers to the direction perpendicular to the width of the film. Acronym: MD.

The micron is the unit of measure used to measure film thickness. One micron is equal to one millionth of a metre.

Necking is when a film loses its distribution roll width/width and narrows as it is stretched. Necking reduces the coverage provided by each parcel, which may require more parcel rotation and more film to wrap the load or pallet.

Refers to the amount of stretch film applied to the top of the load. The overwrap provides a downward force on the pallet load and is usually used to hold the pallet top or corrugated top cover in place.

Post-stretching is the process of stretching film by using a load to pull the film out at the same time as applying the film. Although this facilitates film tension, the tension level is inconsistent and can therefore damage many load types. It is possible to try to obtain higher tension stretches, but this increases the risk of damaging some load types and increases the chance of stretching the film to break.

Pre-stretching is the stretching of film prior to application. The process can increase film strength, improve load integrity, reduce the amount of stretch packaging film required and save on stretch film packaging costs. Today, many stretch films are designed to achieve optimum pre-stretch values, which can be achieved with advanced high-performance stretch wrappers as well as pre-stretch films for manual application operations.

An additive used in the material manufacturing process to increase the “stickiness” of a film or material. See also: tight-fitting tears.

Refers to the ability of a film to resist tearing. This property is quantified by measuring the force required for the spread to start tearing.

Tensile strength is a measure of the maximum force that a material can withstand without breaking. The greater the tensile tensile measurement, the stronger the material.

Tension stretch is the tensile force that stretches a material. For example, stretching a rubber band will make it longer because as it gets longer, its tension will increase. Also known as post-stretching.

Refers to the direction across the stretched film web. Also known as TD.

The amount of stress a material can withstand without permanent plastic deformation. The material will deform elastically until the yield point is reached, but will return to its original shape once the stress is removed.

Refers to the lack of resistance to the initiation of a TD tear or cut. Once started, a tear spreads rapidly.